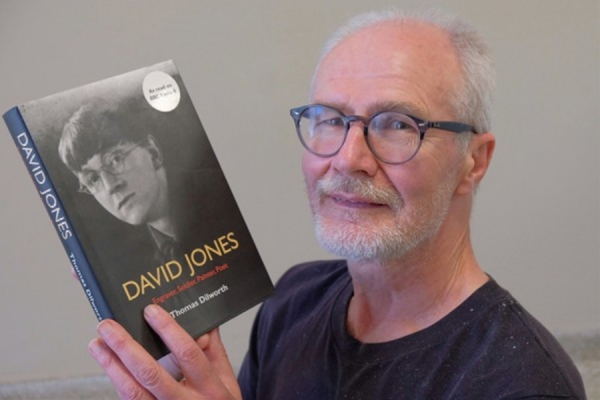 The new digital version is a slight revision of the original transcript that is three times longer than the print publication and includes 174 more reproductions of Jones’ artwork.

“The print publication of the book published in 2017 was limited to 432 pages,” said scholarly communications librarian, Pascal Calarco. “The digital version we created will allow Dr. Dilworth to share the full 1420-page publication as an online resource.”

Dr. Dilworth dedicated over 30 years to researching and writing the biography about Jones, who was a solider, poet, visual artist, and essayist.

Jones’ poem In Parenthesis (1937) was acknowledged as the greatest literary work to emerge from World War I, winning the Hawthornden Prize and the admiration of famous writers such as W. B. Yeats and T. S. Eliot. Based on his experiences from World War I, it painted a vivid picture of the experience of a solider who fought at the Somme.

“Jones spent 117 weeks in the trenches, longer than any other war writer,” said Dilworth. “As a result, he suffered severe depression and agoraphobia for much of the rest of his life, which makes his creative output in visual art and poetry all the more impressive.”

Unlike the print publication, the online extended version of David Jones Engraver, Soldier, Painter, Poet includes passages from the 246-page poem, In Parenthesis.

“Because of its British military language (technical and slang) and its range of registers and of allusions, In Parenthesis is not easy going for many readers,” said Dilworth. “Although it is the raw and real language of the poem that has resonated with other war vets of the Great War and later.”

A friend of Dilworth’s is a veteran of the Vietnam War who counsels other vets suffering posttraumatic stress.

“He would read passages of In Parenthesis to them, and they agreed with him that it captured the reality of war,” he said.

Dilworth, who visited Jones in the nursing home in the early 1970s, recalls his stories about raids and night patrols in no-man’s land.

“I got a kick out of being able to date precisely some of the events he spoke of,” Dilworth said. “His experience in the trenches, longer than any other war writer, and his suffering from it for the rest of his life has always increased the poignancy for me of Remembrance Day.”

For those looking to learn more about the life and work of David Jones, the full publication is now available on the Leddy Library website.