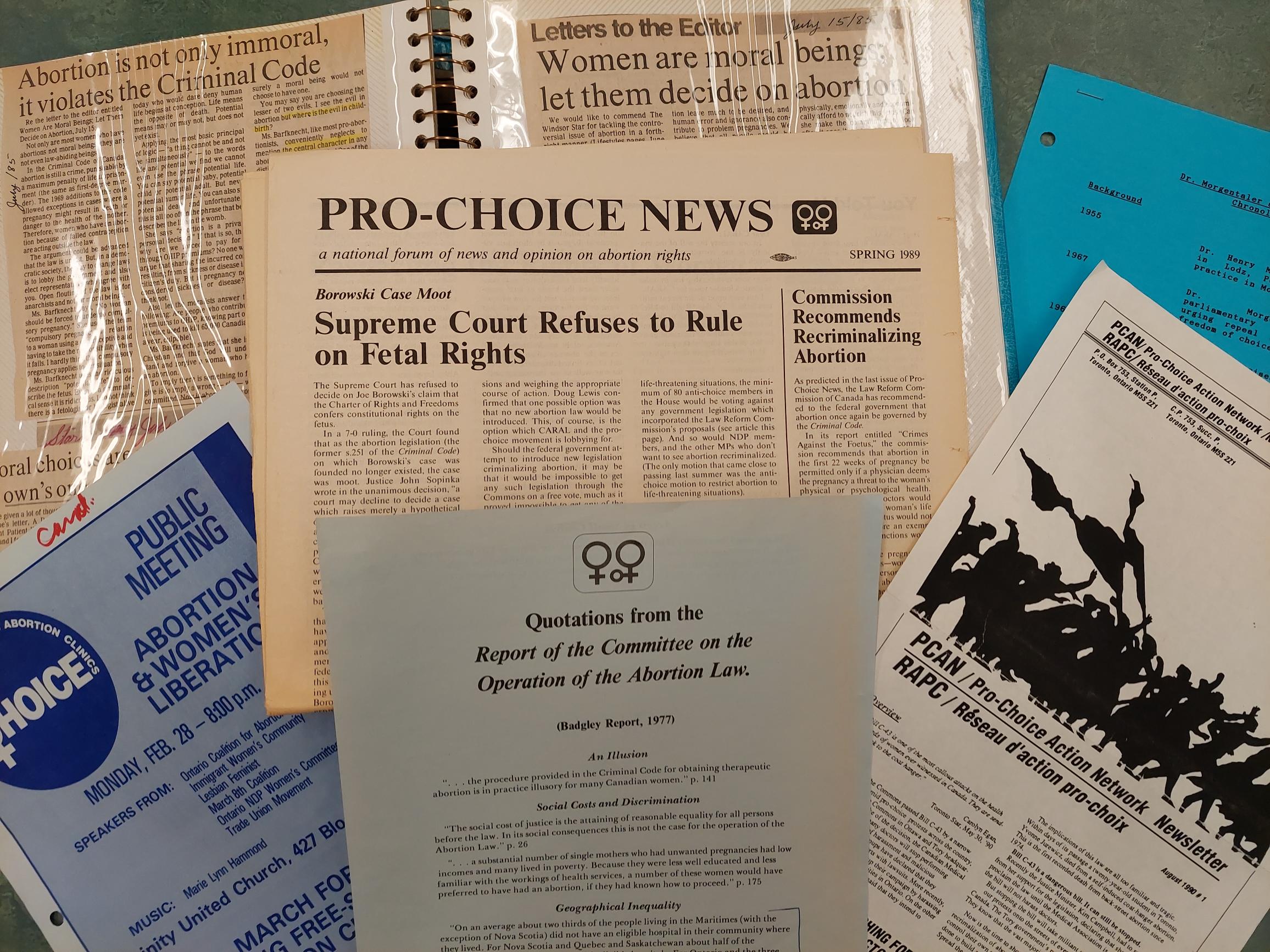 [Archivist’s Note: The recent leak of a US Supreme Court draft decision that would overturn the landmark Roe v Wade ruling on abortion access for American women has brought reproductive rights to the front of mind for many North Americans. Here in Canada, abortion activism has been relatively subdued in recent years, but this student post – written prior to the leak of the draft decision – makes it clear that abortion and reproductive rights were rallying points for many late-20th century Canadians. The collection described below was donated in the mid-1990s by activists within the Windsor CARAL organization and, although largely pro-choice, contains material that reflects both sides of the debate. – SCG]


The City of Windsor is known for its rich borderland history and ties to the Underground Railroad. A lesser known but equally important aspect of Windsor’s history includes much of the activism that has occurred in the region. Throughout the late 20th century, feminists focused much of their energy on women’s reproductive rights. Windsor has seen its fair share of activism as a result of second-wave feminism, and this post looks at the factors that influenced pro-choice feminism in Windsor.

In 1988, the Supreme Court of Canada ruled that the existing laws regarding abortion found under the Criminal Code violated a woman’s right to “life, liberty, and security of the person,” as stated under the Charter of Rights and Freedoms. Deeming the abortion laws as unconstitutional meant that many of the barriers women faced in accessing abortions were no longer enforceable.

The decision made by the Supreme Court in 1988 meant that abortion would become a publicly funded medical service, but access to these services varied across the country. Feminist groups who long supported women’s right to choose now shifted their focus to seeking wider access to reproductive services for those in need.

An organization named the Canadian Association for the Repeal of the Abortion Law was formed in 1974 to support Dr. Henry Morgentaler’s challenges to the abortion law.  In 1980 the organization changed its name to the Canadian Abortion Rights Action League, otherwise known as CARAL. After the Supreme Court ruling in 1988, CARAL continued to work towards greater access to reproductive services for women in Canada through letter-writing campaigns, demonstrations, and lobbying the government. CARAL had many local chapters around the country and, in 1989, Windsor established its very own chapter of the organization. What was once known as the Windsor Association for Reproductive Choice (WARC) became the Windsor chapter of CARAL, a feminist organization dedicated to providing services and support to women in need.

At the Leddy Library Archives and Special Collections, you can find a collection of the materials collected and created by the members of CARAL (fonds F 0030). This includes letters, meeting minutes, newspaper clippings, and pamphlets, just to name a few.

CARAL also worked with the University of Windsor on some of its educational initiatives, most notably with the Faculty of Law, the School of Social Work, and the Women’s and Gender Studies department (previously Women’s Studies). Many of the meetings and events CARAL organized were held on campus, and faculty and students at the University were often involved with CARAL as well.

Under Series I, File 13 of the CARAL fonds, one can find resources and materials used to prepare for the University of Windsor’s “Community Justice Week” held in April 1986. CARAL was an organizer in the conference “What the Charter of Rights and Freedoms Means for Women,” held in collaboration with the University of Windsor’s Faculty of Law and another local organization known as the Women’s Incentive Centre.

CARAL was also known to support University of Windsor staff and students in various ways. Correspondence within these fonds shows CARAL was an organization that student researchers could rely on for information and resources regarding abortion laws and reproductive rights locally and around Canada. CARAL also worked with the University’s Womyn’s Centre and supported the Womyn’s Centre while they petitioned for greater autonomy as an organization.

The Windsor chapter of CARAL is just one of the many examples of feminism that existed in the Windsor-Essex region. We may never know the full impact that CARAL had on individuals due to the private nature of the services they provided. What we do know is that there were people in Windsor who cared deeply enough about this issue to dedicate themselves to the pro-choice movement in their own community.

Over the course of the 2022 winter semester, I was able to work with the Leddy Library Archives and Special Collections as an experiential learning opportunity for the course HIST 4970: Local History and Research Methods. During this time, I worked with fonds associated with CARAL and another local feminist organization that was active in the 1980s known as Women Against Violence and Exploitation (WAVE). Throughout this experience, I learned more about how the archives operate on a day-to-day basis and the dedication it requires to work in historical preservation.

What I was most surprised to learn about throughout this experience was that Windsor has a history of feminism that I never knew about. When we reflect on the history of women’s movements in Canada, we tend to focus on major cities but forget to look at how these movements have affected us at the local level. These fonds show that even a “small” city like Windsor was involved with larger historical events that we read about in textbooks. After having gone through this experience, it has only deepened my appreciation for local historians, researchers, and organizations who are dedicated to keeping the history of Windsor-Essex alive. Without them, we would never know about the amazing individuals, such as the members of CARAL, who have dedicated themselves to the community.

If you are interested in learning more about the history of pro-choice feminism, the impacts of Canadian abortion laws, or research on reproductive rights at the local level, the CARAL fonds contain a wide variety of primary documents that provide insight into the involvement of Windsor people in the pro-choice movement. You can find these fonds at the Leddy Library Archives and Special Collections under the name “F 0030 Canadian Abortion Rights Action League (CARAL) fonds.”

Karleigh Kochaniec is a third-year student of History and Women’s and Gender Studies at the University of Windsor. During the Winter 2022 semester she completed an experiential learning placement in the Leddy Library Archives & Special Collections, as part of HIST 4970 - Local History and Research Methods.