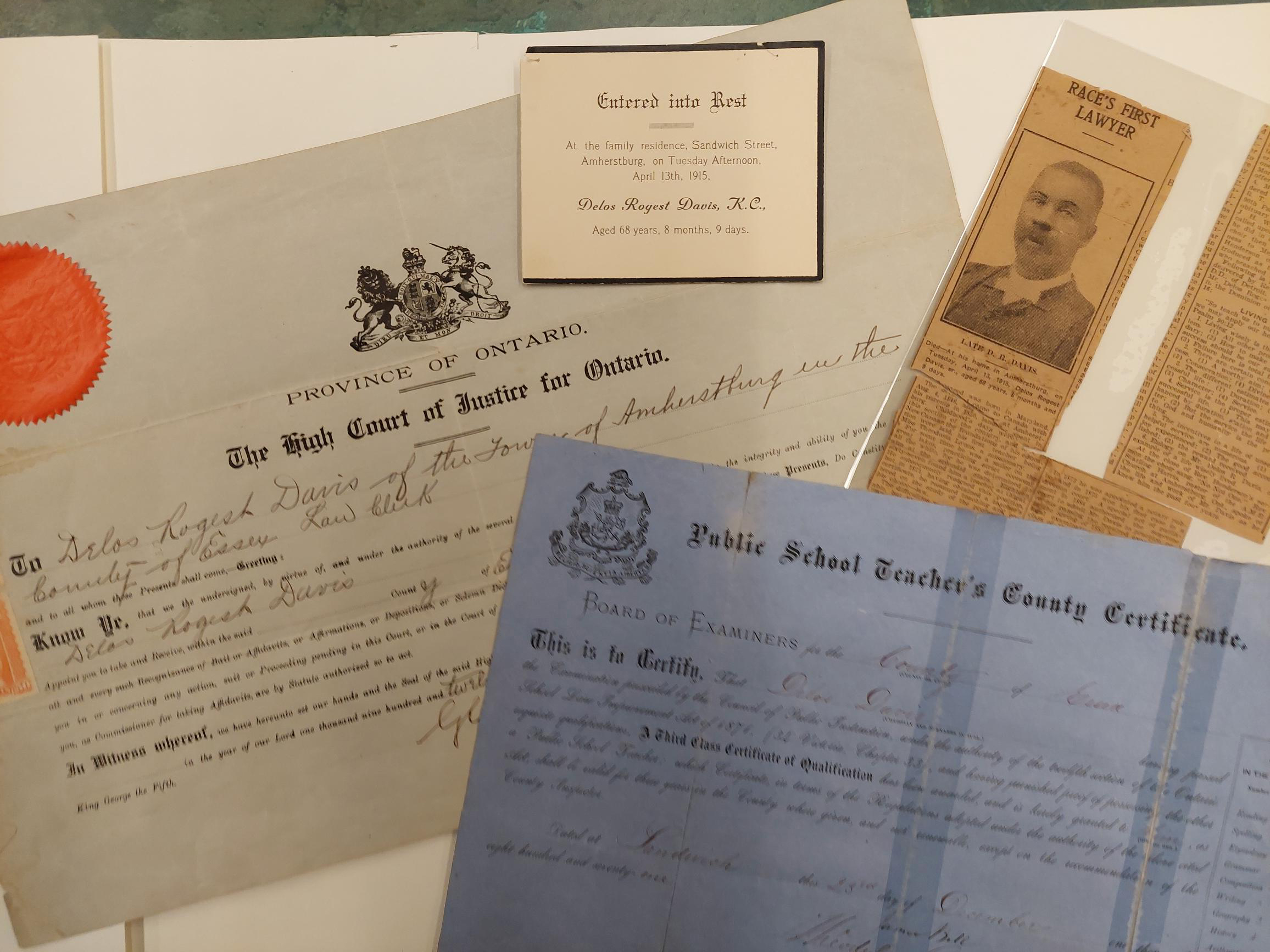 Tucked away within the University of Windsor's archival vault, ambiguously described, lay a box labelled “Accession No. 1995-063.” Now renamed as “F 0034 (Delos Rogest Davis fonds)” the contents of this box, donated in June of 1990, were largely untouched until early 2022. What are the contents of the box, you ask? Well, they tell the story of one man who made big waves in the legal community of Windsor-Essex and of Canada. Let me share his story with you.

Delos Rogest Davis was born on August 4, 1846 in Maryland, USA, to enslaved parents. He and his family escaped to Canada and settled in Colchester Township, Ontario, in 1850. Beginning his career as a teacher in the 1870s, Davis went on to study law first as commissioner of affidavits, affirmations and recognizances, and then as a notary public in 1873. After much hardship, and with the aid a local MPP, Davis passed the bar exam on May 19, 1885. The following year, Davis was called to the Bar of Ontario, becoming (according to The Canadian Encyclopedia) only the second Black person in Canada to do so. Davis’ son Frederick Homer Alphonso went on to study law as well and joined his father's practice in 1900.

Specializing in criminal and municipal law, D.R. Davis established his practice in Amherstburg, Ontario. On November 10, 1910, he was officially appointed King’s Counsel, making him the first Black person in the British Empire to be granted this position. The King’s Counsel (currently known as the Queen’s Counsel) is a lawyer, typically one with seniority, who is appointed by the monarch on the advice of the federal or provincial government. The title is considered a great honour, indicating professional merit. After holding this distinction for five years, Davis passed away on April 13, 1915. He was buried in New Canaan, in the Township of Essex.

Davis’ story comes to life through the various correspondence between himself and his companions, both business and personal, found in the archives. All of the letters in this fonds were written in late 1910 and relate to Davis’ appointment as King’s Counsel. We get a look into Davis’ personal life through passing comments on his personality and character (for instance, he related to the song lyric “Will you still love me when I’m old?”). Supplementing the letters are evidence of Davis’ professional achievements, from obtaining his teaching certificate to his Commission in the High Court of Justice.

Obtaining one’s teaching certificate in the late 19th and early 20th centuries was often the first step towards a higher education. In Davis’ case, he began as a teacher but worked his way up to notary and then eventually lawyer. Given the anti-Black racial prejudices at the time, Davis had to work harder than most to obtain his teaching certificate and law degree. In both Windsor-Essex and Chatham-Kent, education was highly prized by the Black community as a means to improve their circumstances. Still, it is remarkable that he was able to overcome the racial barriers in front of him to achieve such a qualification and then later to be called to the Bar. It required two pieces of special legislation in order for Davis, as a Black man, to practice as a barrister and solicitor in Ontario at that time.

This fonds exists thanks to a donation by the Honorable Lloyd C. Dean. Dean is the great-grandson of Davis, and a local judge. During his time as a student at the University of Windsor Law School, he began delving deeper into the story of his family’s patriarch, with the ultimate goal of founding a scholarship in his great-grandfather's name. He donated these family records to the University around the same time.

Today, Delos Rogest Davis’s legacy lives on in the Windsor-Essex region. His name and photo can be found in a variety of articles and on a few historic memorials. In Canada, his name carries the distinction of being among the first Black citizens to be called to the Bar, and the first to be appointed as King’s Counsel.


Lily Zitko is a student of History at the University of Windsor. In the Winter 2022 semester she completed a placement in the Leddy Library Archives and Special Collections as part of the Public History Practicum (HIST-4810). During her placement, she became familiar with a variety of fonds, but found Davis’s story to be most interesting and notable.