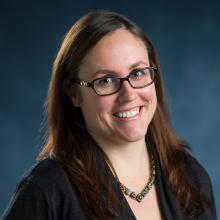 Archives & Special Collections
Dr. Sarah Glassford is an archivist-historian who brings a deep love of the past to both her archival work and her historical research. She joined Leddy Library as Archivist in July 2019, and in that capacity oversees and participates in the day-to-day running of the Archives & Special Collections unit. This includes arranging and describing archival records, liaising with donors and stakeholders, advising on matters related to conservation and records management, and collaborating with other librarians and community groups on projects with an archival component. She also shares the liaison librarian role for History, with responsibility for behind-the-scenes collections work.

Dr. Glassford previously worked as an archivist at the Canadian Red Cross national office in Ottawa, and in both the Private Sector Records and Government Records divisions of the Provincial Archives of New Brunswick in Fredericton. From 2007 to 2016 her first career as a History professor took her to the University of Ottawa, Carleton University, the University of Prince Edward Island, and the University of New Brunswick, where she taught Canadian history, social history, international history, women's history, children's history, the history of humanitarianism, the history of medicine, and war and society. She continues to research and publish in many of those areas, as well as on topics related to archival work, and is an active member of professional associations in the fields of both history and archives.

Glassford, Sarah, and Amy J. Shaw, eds. Making the Best of It: Women and Girls of Canada and Newfoundland during the Second World War. Studies in Canadian Military History series. Vancouver: UBC Press, 2020.

Glassford, Sarah, and Amy J. Shaw, eds. A Sisterhood of Suffering and Service: Women and Girls of Canada and Newfoundland during the First World War. Vancouver: UBC Press, 2012.

Glassford, Sarah. “It Keeps Our Spirits Up: Emotional Labour and Resilience in the Canadian Red Cross Corps Overseas Detachment, 1943-46.” In Making the Best of It: Women and Girls of Canada and Newfoundland during the Second World War. Edited by Sarah Glassford and Amy J. Shaw. Studies in Canadian Military History series. Vancouver: UBC Press, 2020.

Glassford, Sarah. “‘I must do something to help at home’: Rilla of Ingleside in the Context of Real Women’s War Work.” In L.M. Montgomery & War. Edited by Andrea McKenzie and Jane Ledwell. Montreal & Kingston: McGill-Queen’s University Press, 2017.

Glassford, Sarah. “‘The Greatest Mother in the World’: Carework and the Discourse of Mothering in the Canadian Red Cross Society during the First World War.” Journal of the Association for Research on Mothering 10.1 (spring/summer 2008): 219-232. https://jarm.journals.yorku.ca/index.php/jarm/article/viewFile/16350/15209  [*Awarded 2009 Hilda Neatby Prize for best English-language article in women’s history by Canadian Committee for Women’s History]