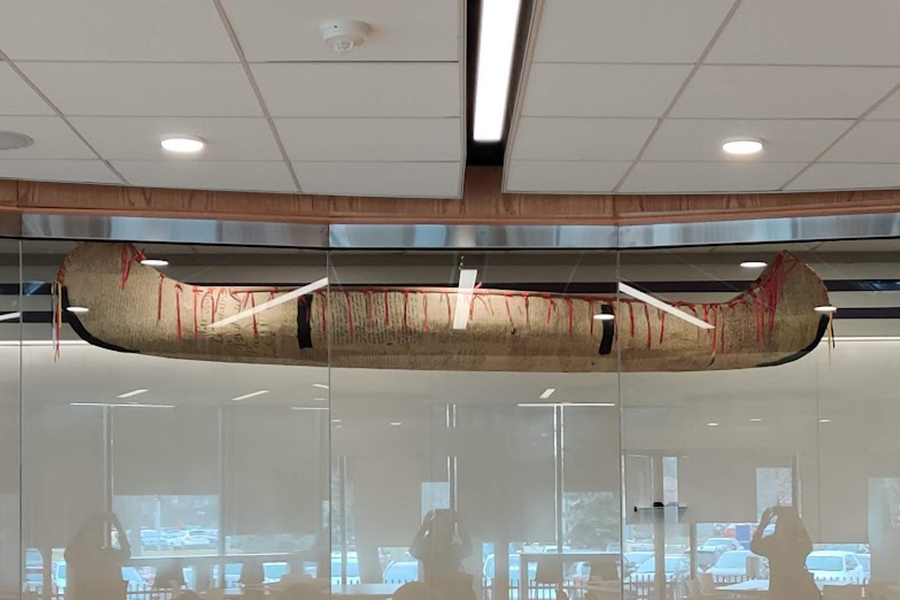 Treaty Canoe, a full-size art installation by artist Alex McKay (BFA 1990), will be on display in the Leddy Library’s Student Research Collaboratory for Treaties Recognition Week.

Treaties Recognition Week takes place the first week of November each year in Ontario and was introduced in 2016 as one way to honour the importance of treaties and to help Ontarians learn more about treaty rights and relationships.

Treaty Canoe was produced in 1999 and built much like a birch bark canoe. Made from red and white cedar, red-ribbon, glue, and a papier-mâché of treaties replacing the ‘bark-skin,’ it is a visual representation of the historic processes of colonialism.

“Using dip-pen and ink, treaties were transcribed performatively by many hands from machine-printed text onto hand-made linen paper to create facsimile documents,” says McKay. “Most scribes choose a treaty that they felt had personal meaning to them, a treaty for the land upon which their family arrived to Turtle Island, or settled, or where they live now.”

McKay notes that the Treaty Canoe speaks of mutual, sacred bonds of honour and makes clear that we are all treaty people.

“During Treaty Week by all means honour the treaties, but not the ones that you can read; instead ask the Indigenous nations what the spirit of the treaties really were.”

In addition to viewing the Treaty Canoe, the library invites users to explore a variety of resources to learn more about treaties. From print to electronic books, primary archival resources, and even physical replicas of existing treaties in the form of wampum belts, a form of treaty used in 1600s to establish relationships between certain Indigenous communities and early European settlers.

The Leddy Library provides access to two replica wampum belts for faculty and staff to use in their teaching, the Two Row wampum belt used in 1613 to mark the agreement of Turtle Island and the Dish with One Spoon used in 1701 during the Haudenosaunee Confederacy.

“Treaties are a part of the warp and weave of Canada’s history, and the history of every resident of this land,” said Jennifer Soutter, Indigenous outreach librarian at Leddy Library. “It’s important we recognize and understand these agreements as we continue our journey of learning and reconciliation.”

A digital copy of the Huron and the Jesuits Land Grant, representing an agreement about land the main campus the University of Windsor resides within, has also been made available for viewing by Leddy’s Archives, along with an English translation.

Learn more about Treaty Canoe and access all the resources on the library’s Treaties Recognition Week webpage.