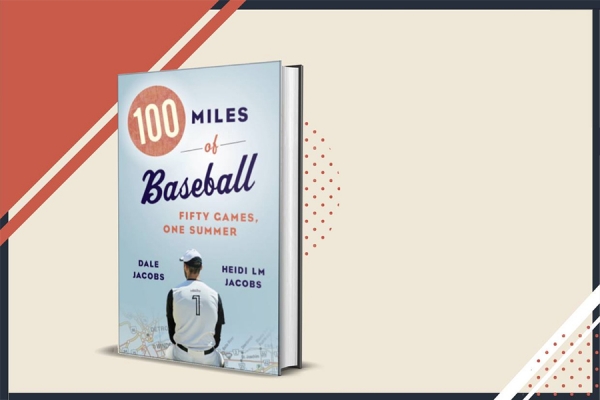 Over the course of the summer of 2018, English professor Dale Jacobs and Leddy librarian Heidi Jacobs watched 50 baseball games in sandlots and stadiums all within a 100-mile radius of Windsor.

The married couple will launch their book on the experience, entitled 100 Miles of Baseball: Fifty Games, One Summer, with an online event Wednesday, March 31.

Dr. Jacobs teaches the course “Baseball, Literature, and Culture” and by 2016 worried he was losing his interest in the sport.

“That disturbed me because baseball had always been my connection to my father, who died in 2008,” he says. “But as we sat in various parks, it felt like Dad was there with me, that I had been able to reconnect to him and my memories of him.”

Heidi Jacobs says she wasn’t much of a baseball fan before she moved to Windsor and started following the Detroit Tigers. Over the course of this project, she developed a new perspective on the sport.

“I came to realize there’s a big difference between going to a baseball game and watching a baseball game,” she says. “How do you learn to watch for something other than a score? How do you train your eye to see the finer points of the game, the details that make baseball such a beautiful, compelling sport?”

And watching players at varying levels of skill helped Dale Jacobs regain an appreciation for the pros.

“It sounds simplistic, but that summer really did remind me that baseball is a hard sport to play,” he says. “It’s hard to hit a baseball that’s thrown by a pitcher who is trying to fool you on every pitch. It’s hard to field a ball cleanly off the dirt, square yourself, and throw to first to get the out. It’s hard to judge a fly ball. It’s hard to hit your spots as a pitcher.

Published by Biblioasis, the book is available through bookstores everywhere.

The March 31 launch will stream live on Facebook and YouTube beginning at 7 p.m. In addition to a discussion between the authors and radio host and self-described baseball fiend Michael Elves, the event will feature a performance by singer-songwriter Crissi Cochrane of an original number based on one of the book’s chapters, and a question-and-answer period.

Chapter Two Brewing Company has created a special “Book & Brews Baseball Bundle” that combines a copy of 100 Miles of Baseball with a four-pack of its Golden Ale beer.

Find details on this and the launch event on Facebook.

Community partnerships
Send us a message