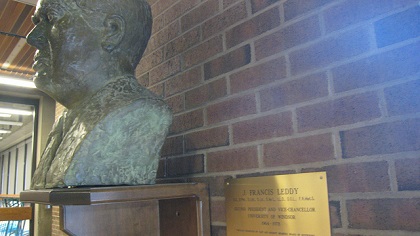 The Leddy Library is named in honour of Dr. J(ohn) Francis Leddy, former president of the University of Windsor. Dr. Leddy was born in Ottawa, Ontario on April 16, 1911, but grew up in Saskatoon, Saskatchewan.

On May 7, 1938, he married Kathleen Beatrice White. Mrs. Leddy had been born with only one arm, but became an accomplished athlete in spite of her handicap. She played both ice hockey and tennis while a student at the University of Saskatchewan. Mrs. Leddy was named to the University of Saskatchewan Sports Hall of Fame for her athletic achievements. Mrs. Leddy was a devoted member of the Christian Science Church. The couple did not have any children.

In 1964 Dr. Leddy became President of the University of Windsor, and continued in that position until April 1978, when he retired. He presided over a period of explosive growth of the university. Dr. Leddy was a bibliophile and donated hundreds of volumes to the University Library during and after his term as president. Included among them were several rare volumes given to him by the Vatican Library. The University of Windsor Library was renamed the Leddy Library in his honour in 1977.

One of Dr. Leddy's proudest achievements was his founding membership, and long term service on, the Canada Council. Dr. Leddy received a multitude of honorary degrees in his lifetime. He was a devout Roman Catholic and received a large number of religious honours from the Roman Catholic Church.