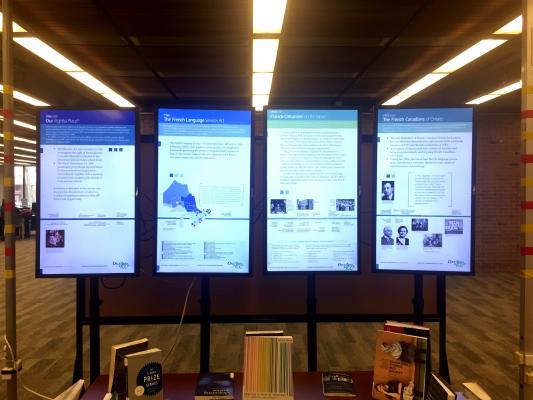 The University of Windsor’s Leddy Library is proud to host the bilingual exhibition Ontario’s Francophonie: Then and Now until February 19, 2016. Visitors can delve into 400 years of French presence in Ontario, from Samuel de Champlain to today.

Our province is home to over 580,000 Franco-Ontarians, who make up the largest Francophone community outside Quebec. The exhibition narrates four centuries of progress, conflicts and accomplishments that have contributed to Ontario’s culture, politics, economy and society.

The Office of Francophone Affairs developed the exhibition in 2015 in cooperation with the Vanier Museopark, as part of province-wide commemorations of four centuries of Franco-Ontarian history. The Ontario Museum Association oversees the circulation of Ontario’s Francophonie: Then and Now, which is also featured in the Virtual Museum of Franco-Ontarian Heritage (www.mON400.com).