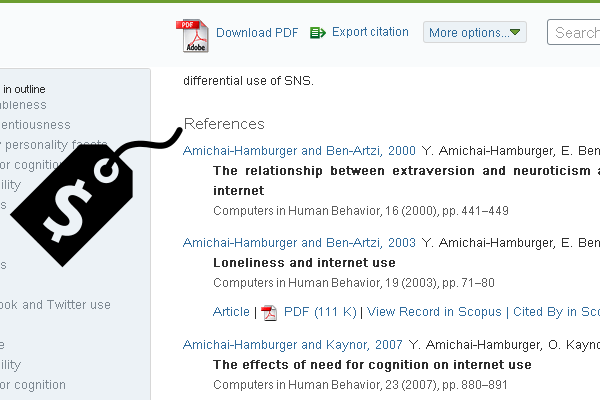 It's Open Access Week and to celebrate, I thought I would try to calculate how much it would cost for me to read an article and its bibliography if I couldn't rely on the subscriptions that the Leddy Library currently pays for.

To understand why I did this, you it helps to understand a little bit about Open Access. I like the definition of Open Access that Peter Suber has developed. (Peter Suber is a philosopher who now works in the Harvard Office for Scholarly Communication). He provides a fairly long definition - so here's a shorten version:

Open-access (OA) literature is digital, online, free of charge, and free of most copyright and licensing restrictions.

The primary difference is that the bills are not paid by readers and hence do not function as access barriers.

Scholarly works are increasingly Open Access but it's still not the norm and different disciplines have different rates of Open Access adoption.

I suspect that one small reason why adoption is slow (but steady) is that active scholars don't always realize or appreciate how much access to scholarly literature can cost an individual who cannot benefit from library subscriptions to scholarly journals and who must shoulder the costs themselves. There are citizens who are unhappy that they help indirectly fund public research through taxation but are not able to access said research. A case in point:

My rule: paywalled science pubs about breast cancer research should be free for people who have breast cancer whose lives depend on research

To be honest, I was personally unsure how much each of the major scholarly publishers did charge for per article access and so that's why I went through this exercise:  I found an article about a topic I was interested in and then found out how much each article it cited in its bibliography would cost if I had to purchase access.

And nowI know this: The cost of all papers cited in this article totaled $704.15 USD

The authors and reviewers of the paper in question are not directly financially compensated for the work involved in the the writing and peer-review of the work.

The publisher of the paper that I've highlighted here is the company Reed Elsevier.

Reed Elsevier accounts for 16.5% of the scientific and technical publishing market, which is almost equal to the next three competitors combined:

“All are in the for-profit sector, and the profits are enormous. As reported in the Economist (2011): “Elsevier, the biggest publisher of journals with almost 2,000 titles, cruised through the recession. Last year it made £724m ($1.1 billion) on revenues of £2 billion—an operating-profit margin of 36%”.  Springer’s Science + Business Media (2010) reported a return on sales (operating profit) of 33.9% or € 294 million on revenue of € 866 million, an increase of 4% over the profit of the previous year. In the first quarter of 2012, John Wiley & Sons (2011) reported profit of $106 million for their scientific, medical, technical and scholarly division on revenue of $253 million, a profit rate of 42%. This represents an increase in the profit rate of 13% over the previous year.”

"You just have to ask yourself whether that’s where you want your money going."

And because I believe that I should show my work here's exactly how reading the works within one bibliography could cost you $704.15 USD 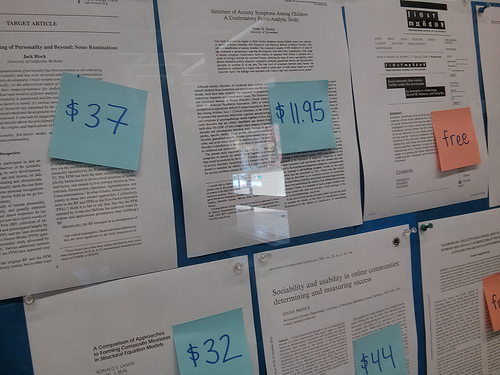 Open Access Week is about celebrating the alternatives to the status quo and about imaging what could happen if the cost of knowledge was not set so high.

Price Tag designed by Atelier Iceberg from The Noun Project